We first tried for some Mackerel and after we had caught enough we decided the best tactic was to try for Smooth Hounds for a couple of hours, we all tackled up and let our lines out and didn’t have to wait long as Ziggy’s mate Gary was into the first smooth hound. It was only a small one but it got our hopes up, he then had another one and then Barry was into a nice one about 5 lb then it was my turn and I landed one about 7 lb followed by Kenny who landed one about the same size and then I landed another, this time it was estimated by the skipper to be around the 12 lb mark. I was really pleased with this one. Barry also landed a nice Spotted Ray of about 2 lb and the rest of the catch was made up with small codling that were all returned. 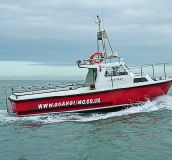